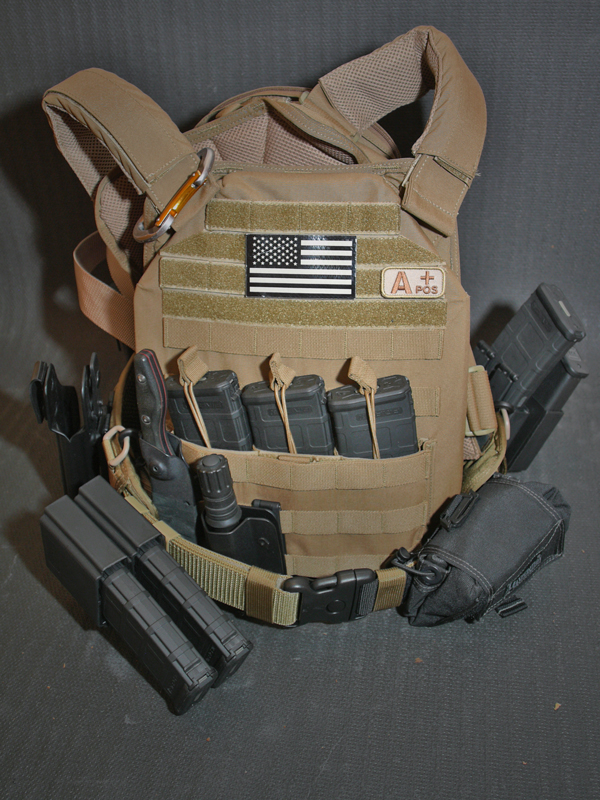 Over the years I have had ample opportunity to use a relatively substantial variety of body armor. The tremendous variety of armor configurations and, in some cases, so called technology amazes me. I know that some guys swear that they will live or die by this brand or that, and that others have particular preferences in regards to how they combine this soft armor and those hard plates. But not everyone has the luxury of sophisticated opinions, as many do not have the pocketbook to afford them.

When my own brother was serving in Afghanistan and had voiced his dissatisfaction with the current issue armor carrier system, I immediately took action to get him what best suited his needs. Armor is the type of thing that you don’t fuck around with.

Most of the people in my circles have some particular armor rig that they landed upon at some juncture and stuck with for years. Mine was a Safariland apparatus that had integrated mag pouches on the front, and an integrated radio pouch on the back—that is all. It was a heavy vest, one of the soft/hard armor combos that could stop an AP round or two. I liked this vest a lot, I still own it and I might never get rid of it in fact as it has become my “truck armor”; a permanent resident of my truck tucked away in an inconspicuous duffel bag, just in case.

Long story short, I eventually got stir crazy, wanting a vest that would offer faster access to magazines and other apparatus, something lighter and faster that also offered greater mobility. So, I got to looking.

I had been friends for quite some time with a company called TYR Tactical on Facebook and had been taking note of some of the fantastic gear that they offered. There wasn’t any one particular item that had struck me, but most everything they posted seemed to be worth a second look. One day during the course of conversations with a friend of mine, we got to talking gear. For whatever reason, I thought to ask him if he knew anything about TYR Tactical. As it turned out he did not, but he knew of a mutual friend who did. I was more than enthused by this news and made a call straight away. After a rather in-depth discussion on the tenants of quality gear from my second friend, I hung up the phone with nothing but enthusiasm. 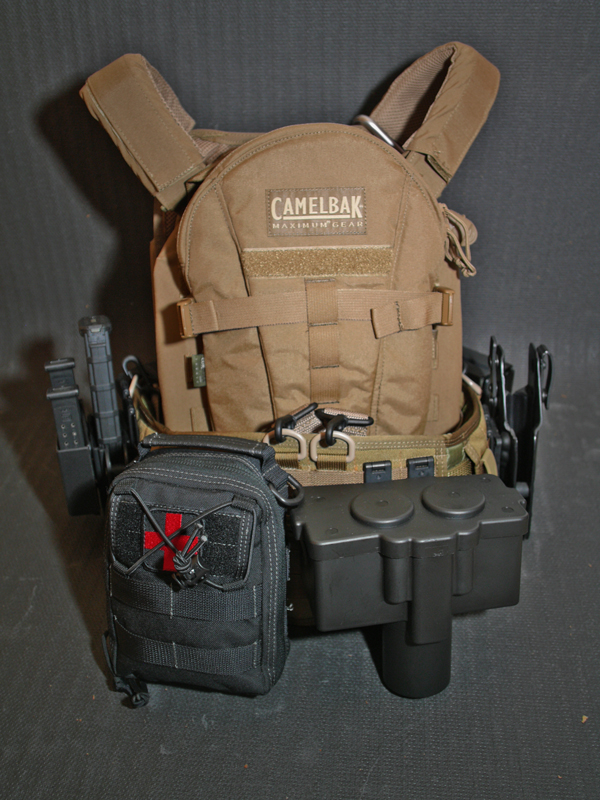 My friend had suggested that I check out TYR Tacticals BPC (Basic Plate Carrier), GPC (General Plate Carrier) and Brokos Belt specifically. I was looking for a light weight rig for SAPI plates but no soft armor, so his recommendations seemed to be in line with what I was looking for. I already had a custom battle belt on order from a local company called Loadmaster Tactical, so the Brokos was already off the list. I began to contemplate some of the more heavy weight options but I had already talked myself out of side plates and wanted to build a sincerely light weight rig for a change.

The BCP was by far the lightest that TYR Tactical had to offer and the price was right, so I felt like I really couldn’t lose in choosing the BPC.

When the Basic plate carrier arrived, I already had the SAPI plates waiting. I opened the box and removed the BPC from the plastic bag. I then examined the material and tore open the Velcro closures in order to give it a thorough inspection both inside and out. From the material to the Velcro to the grommets to the stitching, the results were more than satisfactory by my standards. I was ready to try it out.

I cautiously slipped each of the plates inside until they rested in place. I pulled over the flap, secured the Velcro closures and took a moment to admire the fine construction of the carrier. The moment of truth with any given armor system is “only” several Velcro adjustments away. But, after those adjustments I found myself feeling quite at home in the BPC. The padding seemed just right; not too much and not too little, but most of all the configuration of the padding seemed to be breathable and highly effective at providing comfort to the user. Features such as this are not only of primary concern, but in the field a necessity.

How exactly to outfit the BPC would seem to be an almost fore drawn conclusion having chosen a carrier with precious little real estate, but it wasn’t. I hadn’t quite decided if I was going to use the integrated kangaroo pocket M4 triple mag pouch or if I end up substituting the pouches with Blade Tech mag pouches that I had on order. I knew for certain one thing, that no matter how I chose to build it, I was leaving room for my Back Bite knife.

I had put in a relatively tall order with Blade Tech in that my order was of the complete and total apparatus variety. I had been piecing together a variety of Blade Tech gear over the years but much if it came and went whenever I sold the firearm that I owned the Blade Tech gear for. But I hadn’t experimented with much beyond the typical handgun and handgun magazine holsters. This time was different. I loaded my cart with double stack AR pouches and even swung for the fence with a PVS-14 hard case. Again, I had no idea how I was going to configure all this gear, but I had the TYR Tactical BPC and a custom made battle belt and these that would dictate the layout. 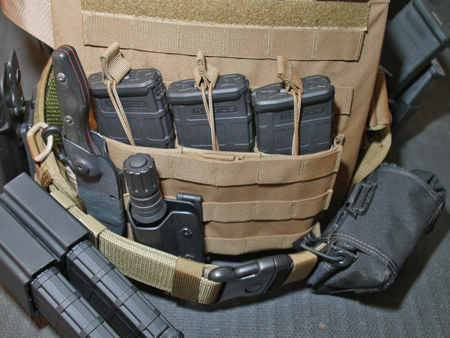 I guess I could say that I have seen a good deal of plate carrier and battle belt configurations that I don’t seem to agree with. In some ways, the manner that others configure their gear is similar to other people’s tattoos; you don’t have to like them. But to watch these people operate their weapon while using their gear is another story entirely. At least in my experience, we would all do well to take some notes from a competent medic in regards to gear configuration. A place for everything and everything in its place is life style for these guys, and not some kind of fashion statement.

Fist, I pulled the triple mag pouch from the BPC in order to try mounting the Blade Tech double stack AR mag pouches on the front of the TYR Tactical BPC. This first configuration might have won the day but the configuration was a conflict of interest in some ways to my intent. I didn’t want to be as top heavy or as front wide as my more typical armor configurations. I then pulled the double stack AR mag pouches and thought it through a second time. I reconfigured the original triple mag to the kangaroo pouch and began to rethink my course of action.

I then realized that my initial goal was to disperse much of the gear that had typically rode on my vest to the battle belt, for whatever reason I had completely lost sight of this objective by starting with the Plate carrier first. It was time for a redo.

I began loading the battle belt with my Med Kit and NVG, which took up all of the real estate to the rear. I then attached a Blade Tech combo pouch that held a single AR mag and two Glock mags to my left and a Maxpedition dump pouch in front of that.

On the right hand side I attached the Blade Tech Glock holster and in front of that I vertically mounted a Blade Tech double stack AR mag pouch. As simple as that sounds, this configuration allowed me to strike a fantastic balance between the battle belt and the TYR Tactical BPC. I loaded the BPC with three mags in the kangaroo pouch and to the front of that mounted my Back Bite knife using a malice clip and two more Glock mags using the Blade Tech Molle-Lok. This not only kept my front side lean for the purpose of going prone but also split my pistol mags and carbine mags 50/50 in order to give me fast access from a variety of positions.

Run before you Gun

Once you have configured any manner of battle rig that you believe you are satisfied with, I suggest that even before you hit the range with it, that you quite literally take it for a run. If your neighborhood (or lack thereof) permits of course, you should do so fully loaded. This permits you check your suspension between your suspenders and your battle belt and also to turn up the heat and see how much room your body needs to breadth under stress. By this I mean to get your chest heaving for air, by running. In doing so you will also see how much space is required in order for your core to cool while wearing your plate carrier.

I made some minor adjustments both before and during my battle rig run. I would hope that anyone going for such a run would stretch first. Use your stretch routine also to make adjustments to your gear. A few quick up downs and lunges will let you know if the weight of your rig is dispersed in an appropriate manner and if you need to do something about it. 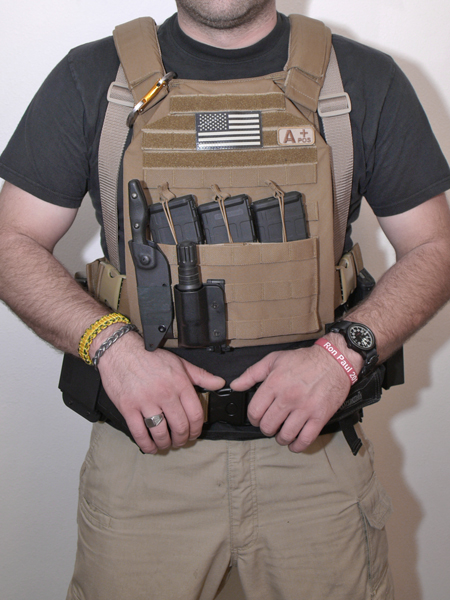 As it is October and I live in Wisconsin I cannot hope to tell you how the BPC responds in a hot arid environment, but I can tell you that it is an extremely comfortable rig and the measures that I have taken to turn up the heat due to physical demands that I am most impressed. Lacking a cummerbund heat readily escapes the body, just as you would hope that it would.

I chose to combine the products of two fantastic manufacturers, TYR Tactical and Blade Tech, in order to build a rig that would offer tremendous speed, versatility, durability and comfort. I thought long and hard before I chose these particular products and once combined they have each delivered handedly with quality, durability and ingenuity that is worthy of both of their reputations.

For more information in regards to these fantastic products, please visit –