I don’t know what about it caught my eye and I cannot say that there was one particular thing that sold me on it. I cannot even tell you how I came across it with any more certainty than I can tell you how many AR type builds have passed through my hands in the past 10 years. However, now that I own the Rock River Elite Comp I feel a bit dumbfounded in my good fortunate in having chosen it.

The Rock River Elite Comp was a bit of an impulse purchase in many ways. I honestly feel as if I was struck by some manner of “love at first sight” that turned into a happy mirage. But, I suppose that sounds like “dreamy” talk… so, let’s move on.

I had been building, picking apart, stripping down and loading up various AR platforms for years. I am certain that if you are reading this then there is a good chance that you have done the same. Building is like some manner of riddle that you hope you just might solve. I know a guy with a safe full of his various builds but when it comes down to it he only has maybe two or three that he actually shoots.

I have actually never owned more than two AR type platforms at one time. Typically both served relatively the same purpose. But one was my “keeper” and the other was always on its way out the door.

I spent many hours and dollars on these projects. Tinkering, researching, modifying, fitting and so on. Then one day I got sick of it. I had an AR build that I was satisfied with but simply didn’t want to “play” anymore. My life began to center around long range shooting for a time and my Remington 700 build was the focus of many of my outings to the range. At this time one of my brothers voiced his interest in taking my AR off my hands. A bit reluctantly, I parted with it. This was the first time in years that I did not have an AR at my disposal. It felt odd not having one but I had no inclination of what to do about it or what direction to take. I honestly did not want another project gun, so in the interim, I did nothing. 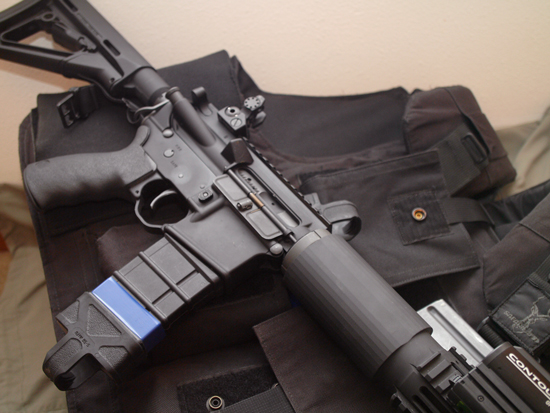 Time passed and I was getting the itch. I had retained an abundance of gear and without a rifle this gear had no real purpose. I began tossing and turning in both waking hours and asleep. I was tormented by the task that lay ahead. Brands of lowers were spinning in my head and options for uppers. A base gun perhaps, a trigger, a rail system… my mind began to go numb, but the list went on.

So, I went shopping.

Having racked my brain with options from the new and popular to the old and the “tested”; a guy could go just about any given direction. For as much as I looked, I did not find myself truly compelled to go one way or another.

I suppose what I was looking for would best be defined by purpose and might fit somewhere between… patrol and designated marksman. I was leaning away from building and leaning towards picking up a base rifle and building it up over time; The benefit of this option being that you can go home that very day with a functional rifle and you don’t need to drop all of your coin at one time. But that is where the building begins. For as much as it pained me, I was resigned to saddle up and do it all again.

Then one day, I was struck by a lightning bolt!

I was on the Rock River Arms website and looking. Lowers, uppers and the like. Then for no apparent reason I clicked on the complete Rifle link. I clicked away until I landed on the Elite Comp.

If a combination of looks and specs could kill I believe that I was dead on arrival. I gazed upon perhaps precisely the rifle I had been looking for and began to read. Here are a few things caught my eye.

The Elite Comp was a handsome configuration to say that least, and it seemed to have all the right stuff. I was very much taken by the Rock River Half-Quadrail, Rock River is well known for their triggers and I have never heard of a RR owner speak of poor accuracy, I was sold. Relieved that the search was over, I called a dealer across town and asked that he order me one.

In all honesty I was just as prepared to be pleasantly surprised as I was to be let down. Part of me knew that it would be tough to be sincerely let down by a manufacturer as reputable as Rock River, but another part of me was slightly shocked by my fast impulse to pull the trigger on the purchase. My Elite Comp was set to arrive shortly, but I found myself trying NOT to think about it. This was a truly loaded package, a far cry from a stock option or the build your own routine that I was accustomed to, something about it was honestly a bit unsettling.

In the interim it dawned on me that I didn’t even know for certain what the “Comp” in Elite Comp stood for. This bothered me to no end. I searched the internet and was coming up empty handed most everywhere I looked. The most I could tell was that the Elite Comp was introduced in 2008 and I found some commentary in regards to Rock River throwing pretty much all of their new bells and whistles at that time into this rifle. So, I called Rock River to get the skinny.

Whoever I might have needed to talk to at the time was busy. But someone on the other end of the phone was kind enough to get hold of someone who confirmed that the “Comp” was short for competition and supposedly the design had certain features geared towards three gun match competitors… For as much as that was the short answer it was good enough for me.

Looking at the Elite Comp I didn’t see some kind of… race gun. As far as the firearm features and benefits were concerned I saw nothing less practical than many in Tactical Operations would aspire to build. For knowing nothing of three gun matches, I decided to let sleeping dogs… sleep.

As I waited for my Elite Comp to arrive I began to speculated about the weight, at 8.4 lbs, it seemed a bit heavy but I expected that this would be a trade off of sorts; that this model of Rock River would have something not yet tangible that would make the seemingly extra weight worthwhile.

Fortunately, I did not have long to continue to speculate. Rifle in hand there where many things going through my mind, how much it weighed was not one of them. Instead, I was quite fascinated by the construction and the fact that I simply didn’t immediately want to modify a damn thing.

The Elite Comp was LOADED – Half-Quad free floating rail system (numbered, of course), the flip up sights, MagPul stock, oversized winter trigger guard, “star” safety switch, I even liked the “ERGO” grip and three forward sling mounts… (I must admit, two of them eventually had to go.)

The Elite Comp had a custom feel straight out of the box, a far cry from having potentially gone the route of standard production carbine. And I was Very glad for it!

I had been toying with the Elite Comp for a few days and reading up on a bit of this and that.

I found a bit more information in regards to the mid-length gas system. On the same 16 inch barrel the gas block and gas tube are extended by approximately two inches. This would supposedly reduce the shock of the pressure being transferred to the bolt carrier as this provides the gas with more area to expand. I must admit that I did not find the mid-length gas system to be all that interesting. However, extending the gas block forward by two inches adds two inches to the sight radius, a benefit for certain.

Satisfied with the overall composition of the carbine, I was tired of thinking and ready to head out to the range. I have a number of places that I shoot but the most readily available only offers… 10 whole yards. My schedule was a bit tight, so I took the first, and most readily available, option. At ten yards there is not much learn about your rifles capability, it is only an opportunity to get a feel for it (or discover if perhaps if you sights are seriously maladjusted). The feel however was Very Nice indeed!

After sending a few rounds down range I was kicking myself for not having made the extra effort and have gone out of my way to get the yardage that was necessary. There was nothing needing in sight alignment, only an incredibly impressive trigger that had me wanting badly for distance. From a supported position I was kicking out three shot “groups” with the look of one hole in the paper where three rounds had actually been fired.

Rock River advertises the Elite Comp as accuracy of 1.5 MOA. But I had a feeling, in part based on previous experience with Rock River, that the Elite Comp would be far more accurate than advertised.

I guess that the typical gun review thing to do would be head out to the range with four or five brands of ammunition, print off a number of groups and take some photos, but this my blog. So, moving on.

Shortly thereafter I got my hundred yards. I had not yet picked up a bipod adapter to I decided to go the sand bag route. I brought two types of ammo, cheap and affordable. I will note, not Wolf brand cheap but… (Ok, Fuck it, XM193F and Black Hills). I set up my station and then proceeded to surprise myself.

For testing purposes I attached an ACOG that has been lying around. I first shot the XM193F and was a bit astonished to have managed a 1 (and a fraction) MOA group. But with the Black Hills I produced three even more impressive groups, one 3/4 MOA and two consecutive groups at 1/2 MOA! This was exciting stuff to say the least.

In fact it got me rethinking my entire outlook. I found myself suddenly needing a scope that would enhance all that the Elite Comp platform had to offer. Most all of my scopes and red dots have been replaced over these last few years by Vortex brand optics. I had been following some of the new models but had not had any recent necessity. I then recalled a model from the Vortex Razor line, a 1-4 power, with a unique 5.56 reticle. My vision of this combination would be the icing on the cake. Since the addition of my Vortex Razor HD the Elite Comp has the feel of a quite complete and formidable package, but I will elaborate on that another time.

Bottom line, I could in all sincerity not be more pleased with my Rock River Elite Comp. It is solid, capable, accurate, reliable and downright sexy. From the big features to the small details the Elite Comp has continued to grow on me and continues to grow with every round that I send down range.

My best wishes to all the folks that make it happen at Rock River, for more information please visit – www.rockriverarms.com