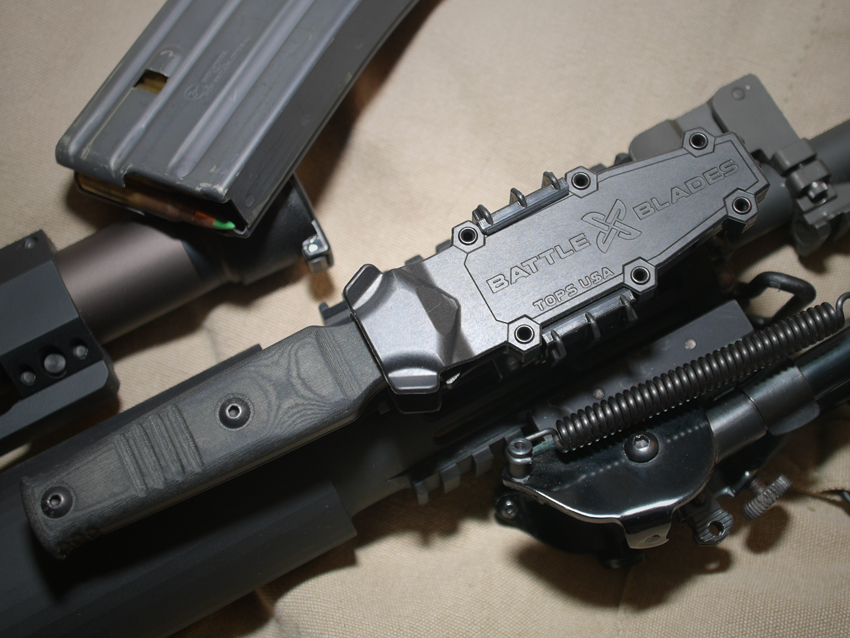 Sometimes the stars align and a particular product seems to come along at just the right time and in just the right place. When this happens, part of you might ask, why didn’t I think of that, but conversely you are glad that someone did. The Battle Blades Wolf Hawk by TOPS Knives USA is one such product. It is a solid knife that offers both a unique capability of off the weapon deployment and an ingenious retention system that offers a level of security far beyond any other that I am familiar with.

The Wolf Hawk is a high quality and attractive medium sized blade it is of course very durable which is exactly what one would expect from TOPS Knives. The Micarta handle is slender configuration but offers ample grip for even the largest of hands when performing either delicate or more aggressive work. But that’s not all.

The Battle Blades Wolf Hawk sat mounted to a blue gun AR15 on the table. My reaction to the product was nothing shy of instantaneous enthusiasm. I asked if I could see the knife and I was handed the entire gun. It was not until then that I realized the full scope of the Battle Blades innovation, that being, when I attempted to draw the knife from the rail mounted sheath system and failed. Before I had drawn any attention, I again tried to no avail. I began to look for some manner of release mechanism and in those few moments was coming up empty handed. Before I was able to exhaust the options I was shown how the blade released.

It was simple really, a simple to execute technique as opposed to a matter of strength or finesse. I had to admit that something about this concept was rather fantastic.

More than a Knife

There are some cases where a knife is more than a knife. In the case of Battle Blades knife, it is truly a system. The Battle Blades system consists of a knife and a sheath, the function as a unit to provide unparalleled retention and unique mounting options. Anyone can grab a roll of hockey stick tape and strap their knife to fore grip of their weapon but they wouldn’t have created a system in doing so.

Retention is the key element of the Battle Blades system. I probably don’t need to go into detail in regards to the reasons why it would be bad to have an unsecured edged weapon strapped to the fore grip of your long gun, but I could give you more than a few good reasons to have a secure one. Going prone is one such reason as this inhibits your ability to access an edged weapon that is on your person.

Although the Wolf Hawk may have been primarily designed to be mounted to the rail system of a weapon such as an AR15 I soon discovered other viable options as well.

While the fore grip mounted option provides a unique option for both close quarters combat and ready accessibility in the prone position, further exploration lead to mounting and drawing from the stock and even vertically with the Battle Blades Wolf Hawk sheath taped between two magazines, which also worked remarkably well.

The core of the Battle Blades system is its injection molded sheath. Unlike other sheaths, the injection molded Battle Blades sheath has a set of “jaws” that clip into a small recess in the handle of the knife. With a gentile push the sheath goes “click” and the knife is secure. To release the jaws simply slide your thumb and index finger between an extensions of the sheath, the “jaws” widen and the knife is free.

This process is very easy to master in a short period of time. This equals easy access if you know how, but no accesses of you don’t; and unlike some manner of button to depress, the knife cannot be inadvertently loosed by an adversary. Of course practice makes perfect and like any other implement I would highly suggest practicing the draw stroke until it is second nature.